The time has passed now, but I’d intended to blog on the anniversary of the flood last year. The contrast between the river now and then is quite ridiculous. Unfortunately I never managed to take a pic of the river when it was at its height last year, but I would estimate it reached close to twelve feet. Might not sound like a lot, but currently it is trickling lazily over the river-bed rocks at a depth of about one inch. Seems impossible that it could ever be so fast-moving, so dangerous.

It happened on July 7th, a notorious date for many reasons. This year it was the day Andy Murray won Wimbledon and as the river dried up under the constant sun, most of Stockbridge was silent in front of TVs willing on Andy to win that trophy.

The culprit for the flood last year was the unfinished flood wall. A work that’s been in progress for a few years now. The small bridge (Bell’s Bridge) over the Water of Leith has now been re-opened at last and I was struck by the changes to the view. I have a photo taken in 2008 before the work started and one taken the other day.

With sun flattering the scene, the photo is kind to the wall. I like that they have finished the wall with a traditional brick-look, even if I know it’s concrete with massive pile-driven metal foundations inside.  Other than that it seems terribly brutal; a monolithic wall. Hopefully some vegetation will eventually cover up the harder-looking parts of the wall and soften its appearance.

The wall is there to do a job, and if it prevents a future flood then I can make my peace with the destruction that’s been done to the river bank. Wildlife is returning and parts of the bank are growing in this hot summer. It will of course take a few years, but I can’t help feel my heart sink when I see the stumps where great trees once grew, and unending grim concrete where once a characterful Victorian wall stood, and for the most part resisted flood many years later. There is no doubt it needed repairing and strengthening, rebuilding in places, but I wonder how much this major construction project needed to happen. Mixed emotions over it. I certainly don’t want to see a scene outside my door again like the one in the photograph at the top of the post.

Recalling the events of exactly twelve weeks ago, I discovered some video footage taken by an intrepid wanderer during the height of the floods. This video is of our street when the flood waters were at their peak. I’m so glad our flat, though a ground floor colony flat, was at the higher end of the street.

What the video really brings back is the feel of that morning. The ceaseless rain. The unending drabness of the sky, and the weird silence as everyone just waited for the outcome, or for someone to come and take care of the situation. Everything’s so normal again around here now, it’s mightily surreal watching this video.

A knock on the door at 8.30 in the morning woke us up. I stumbled to the door but no-one was there, although I heard further knocking at the neighbour’s doors. Somehow, even though the street was already filling with water and the rain was lashing down, I didn’t register that the Water of Leith had burst its banks at the end of the street and was on its inexorable way towards us. I just thought there was a pretty spectacular puddle on the cobbles.

The image above was taken after the water had started to recede. If I’d been standing in the same spot half an hour earlier, you wouldn’t be seeing any pavement. The street is on a deceptive gradient, sloping up from the far (river) end to where I’m standing taking the photo.

After my brain finally woke up and we realised what was happening, we dashed out and moved the car which was already being surrounded by water. The rain just kept coming and it looked pretty bleak. Sandbags were like gold dust and very slow in coming from the likes of the council who, to be reasonably fair, were rather stretched that morning with flooding happening all over the city (although when the bags did finally come it was already too late). The sight of the river down by Canonmills was terrifying – a relentless rush of muddy water and debris that was only a few inches from the top of the new flood defence wall.

The waters advanced slowly up the street, through our gate and into the garden. 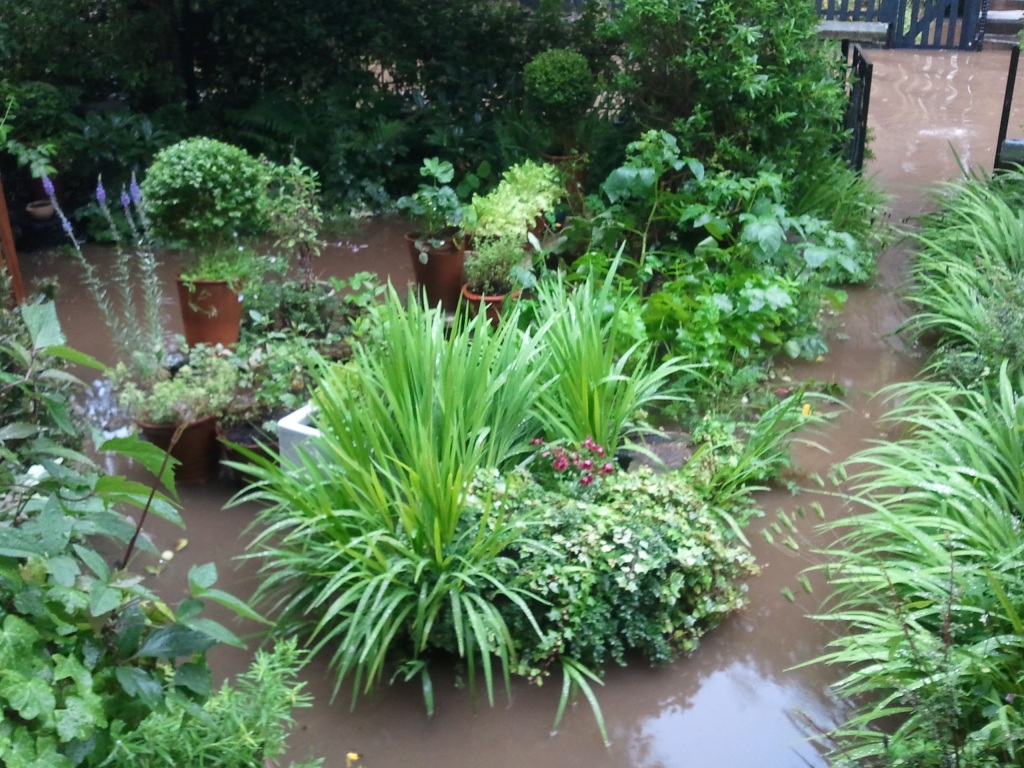 The water lapped right up to our doorstep, which is a few inches up off the ground level of the garden. We had procured some sandbags by this point, two of which I’d taken from a pallet behind a fence at the end of the breached river defence wall, which became a little worrying with the thousands of tons of water thundering past my ankles as I hoofed sandbags under a gap in the fence for myself and neighbours.

The water then seemed to peak. We had emergency bags packed and the cat-box ready if we’d had to leave in a hurry. All the important stuff was up off the floor. We were panicky, but had pretty much come to terms with the fact that this was going to happen and shitty river water was going to flood the house. And then it began to recede. Even though the rain still fell.

You’ll notice my neighbour’s lawn seems to miraculously escape the water. Our moss lawn was actually rather enjoying it and ended up lush and green afterwards.

We were pleased to see the waters dissipate and recede back down the street to be eventually pumped out by the council and the flood defence construction folk. Although we then discovered over four feet deep of water in the cellar.

I’m not going to get caught up in the process of blame and recrimination that is going on re: Lagan construction and their preparation and response to the flood. The weight of water coming down the river was enormous and almost unprecedented after an entire night of ceaseless torrential rain. It was always going to cause problems. Certainly the temporary defences in place to plug holes in the new flood wall weren’t satisfactory as they were easily breached along our street and along Bell and Kemp Place who were hit far worse, but weather forecasting is haruspicy and soothsaying at best (if we were to believe the reports yesterday, another flood of biblical proportions was set to come down the Water of Leith, but it barely even rained) and people have to make decisions based on such shaky advice.

And… to put it all into perspective. The floods in parts of England were far worse – Devon, in particular was hammered. And on the same day, on the Black Sea coast in Russia, especially in the town of Krymsk, 172 people were killed in flash floods. They are having their own blame and recrimination there as well.

We were so lucky. No water entered the main part of the house. The water in the cellar is not muddy, in fact it’s perfectly clear and continues to leak in through the walls after it’s pumped out. The level is dropping, but there is still almost a foot and a half down there today five days after the flood. Pointing out how bad other people were hit is not necessarily a comfort of course. Our own subjective experience is as stressful as it is at the time irrelevant of outside events. It’s only with hindsight that we can realise how lucky we are and think of the tragedy of others.